Joseph and Elsa Hayes made a gift of this 46-acre parcel to the Groton Conservation Trust in 1994.  We are all indebted to them for sharing this beautiful place with us.

The Hayes Woods parcel has an extensive trail network that connects to other open land. It includes glacial terrain including kettles, wetlands, and nature trail. There are several points at which views are available. The property serves as a sanctuary for plants and animals and contains a variety of important habitats. Maintenance of these habitats and refuges is a critical goal.

In addition in 2002 a printed  Hayes Woods Brochure was produced describing a Nature Walk with sixteen stations that are marked with a wooden post.

The American Chestnut tree could once be found throughout the Appalachian Mountains from Maine to Mississippi. The tree used to be dominant in this area, and its bark and
nuts were quite valuable. However, populations have been decimated by a fungal blight. The smooth bark of the young trees will begin to show rust colored vertical
cracks with the onset of the blight, which does not allow them to mature enough to send out seeds. Now the survival of the species is based solely on the fact that new growth sprouts from old stumps with living roots. Scientists have long been attempting to grow blight resistant chestnuts in hopes of saving this important species.

The Common Barberry or Berberis vulgaris is a woody shrub that was brought to this country by European settlers.It has thrived here because few animals eat it. Because of this, barberry is often found on sites that have been grazed.

The Dwarf Juniper can also be found in Hayes Woods. The Dwarf Juniper is a small shrub often possessing several erect stems and branches. The one-half to three-quarter inch long needle like leaves are extremely sharp and occur in whorls of three. Juniper is also found in places that have been grazed.

This pond was created by beavers who have since abandoned it. The industrious beaver is known as a “keystone species,” meaning it has a great effect on its environment. Beavers build ponds by damming streams. This changes the environment, both for good and bad. Those trees covered by the pond will die, yet the Blue Heron now has a
perfect area for its nests. Frogs and other amphibians thrive in the pond ‘s moist environment.

The geology of the Hayes Woods property can be traced to glaciers, huge ice mountains moving along the earth’s surface. The ridges on the property, including the one you are standing on, are known as eskers and were caused by huge rivers that once ran through cracks in the glacier. As the rivers flowed, they deposited soils and built a mound on their bottom. When the ice melted and all the water evaporated or flowed away, the hills
created at the river’s bottom were left.

Kettle holes are another geological feature of Hayes Woods. Kettle holes are formed when huge blocks of ice break off from the glacier and soils are deposited around them. When 1 they melt they leave huge depressions.

Other features on the property include kames, kame terraces, and a glacial moraine

The Lady’s Slipper  is the best known North American species  of orchid.   It can also  be referred  to as the Moccasin  Flower.   They blossom  in a variety of colors,  and may grow for up to 10 years before producing a single  showy flower,  which hangs from the slender  stem.   Partly because of this, they are a protected species under Massachusetts State Law Chapter 266 section 116A and must not be picked or disturbed. 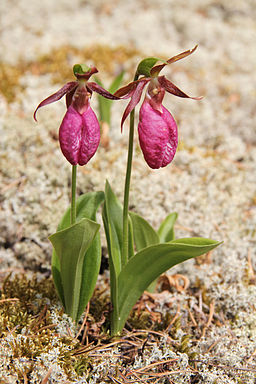 in this area are the Black Birch and the Paper Birch. The Black Birch is distinguished from the Paper by its longer leaves and the dark color of the bark on older trees. In both species, the bark becomes increasingly plate-like as the tree ages.

This station  points out a “light gap” in the forest canopy.   A light gap is a small, well defined  area that has somehow become clear of large trees, allowing  sunlight  to hit the forest floor.  This allows  many young trees, particularly  light-loving ones, to spring  up.

Hemlocks are a dominant species of tree in this area. The Hemlock is an evergreen that reaches 50-80 feet in height, and has dark green needles, one-half inch (or less) long.

The Hemlock is threatened by a parasitic insect called the Woolly Adelgid, which was introduced from

China. The Adelgid sucks the sap from young twigs, stunting new growth. With no new growth, the tree can die within a few years. Loss of the Hemlock would have devastating consequences on the area ecology. Deer, for example, depend on the sheltered Hemlock groves for access to the ground in winter.

Two of the most common types of Coniferous trees found in Massachusetts are the White Pine and the Red Pine. You will notice there is a large White Pine to the left side of the trail and a Red Pine to the right. The White Pine is best noted for having five needles to a bunch, whereas the Red Pine has three. The Red Pine or Norway Pine is distinguished from the White Pine because the bark has a slight reddish tint. In the past, Red Pines
were often used in reforestation projects.

Surrounding Station 10 are several species of Oak tree. Identifying specific types of oak is difficult, as Oaks interbreed. Two different types of Oak may cross-pollinate,
producing a hybrid offspring. Thus there are many possible combinations of Oak types.

Station 11
The pond is home to the larvae and/or adults of many insects, including: Dragonflies, Mayflies, Mosquitoes, Black Flies, Waterstriders, and dozens of others. Small ponds and pools are important breeding grounds for almost all flying insects.

As you gaze across the pond you may notice several bird species:

Great Blue Heron (up to 4 ft. tall) gray-blue in color, and white about the head.
Green Heron (16″-22″) deep green, with a brown neck.
American Bittern (23″) stalky brown with white stripes on its underside

Ducks
Mallard (23″) male has a green head, while the females heads are a light brown

This dead tree has many visible holes in its bark and wood. This is the work of wood boring insects, which have infested the tree and begun the process of decomposition. This generally only happens after the dead tree has fallen.

Here you will notice that the trail comes within view of Pepperell Road and the developed property across the street. By remaining undeveloped, Hayes Woods forms a biological “stepping stone” that species can use to move between surrounding conservation areas. It provides a link between Kemp Woods (New England Forestry Foundation) and the Johnston Conservation Area (Groton Conservation Commission). This is part of a larger chain of properties leading from the Squanacook River Wildlife Management Area to a string of conservation areas along the Nashua River.
This makes conserving Hayes Woods incredibly important, as the linking of properties is essential to maintaining genetic diversity in area animal populations.

The town of Groton, in general, is an area: of staggering diversity. It is on the border of two major biomes, the Eastern Deciduous Forest and the Northern Coniferous Forest. In Groton we find species that exist exclusively north of us sharing habitats with species that live exclusively south.

Station 14 concerns a very large, very old White Pine tree. This tree is an example of a “lone wolf” tree. It was here before any of the other trees. Its many low, dead branches indicate that it once received a lot of sunlight, without other trees to block it.

Several species of fern can be found along this section of trail. Ferns are common in New England and can be found in low, 1 wooded, swampy areas such as this.

Princess Pine can be found along most of the trail. Princess Pine is a member of the club moss group. Club Mosses are now small but that was not always the case. During the Carboniferous period, 360 to 285 million years ago, Club Mosses could reach 100 ft. in

height. The history of these plants is important because they formed most of the world’s coal and oil deposits. The Princess Pine is less than a foot in height and grows best in moist hard wood forests and usually grows in clusters.

Also prevalent along this part of the trail is the Mountain Laurel, which is a native shrub that grows throughout the eastern United States. It is a signature plant on Hayes Woods. In the springtime the hillsides are literally covered in their light pink bowl shaped flowers.

Many individuals, groups, and businesses donated their time, expertise, materials, and financial resources to the successful completion of this project. Among those who have contributed are:
• The Groton Conservation Trust
• Michael Veit, David Black, & Bob Pine
• Bev Rodrigues
• Moore’s Lumber in Ayer
• Moisen Ace Hardware
• Groton House of Pizza
• Main Street Cafe
• Johnson’s Drive-In
• The Rainbow Cafe
• The scouts and adults of BSA Troop 1 West Groton

Without their help, this nature trail would not have been possible.